Less than 50 years to say goodbye to Sushi

According to the U.N. Food and Agriculture Organization, 75 % of the world’s fisheries are now either over-exploited, fully exploited or significantly depleted. A study published in Nature concluded that 90 % of the “big” fish (tuna, swordfish, and marlin) are already gone.

Scientists agree that if we continue to fish at our current rates, all commercial fish species will disappear in the next 50 years.

Government subsidies to the fishing sector, totaling approximately $20 billion annually, represent one of the principal forces behind the overfishing crisis. But the biggest force behind this crisis are the world’s industrial fishing fleets which are destroying the ocean at an alarming rate.

If all the fish we ate was caught old school using a simple fishing rod the oceans would be in much better shape. Small fishermen are trying to shift to sustainable practices, because they are realizing that overfishing is not only destroying the ocean, but also destroying their livelihood, leaving them with no fish left  to catch.

But unfortunately most of the fish that we consume doesn’t come from sustainable sources, it comes from large industrial boats that use highly destructive fishing methods and harvest massive amounts of fish at an unsustainable rate.

Following are some of the most destructive and also most common fishing practices. This is how the fish we consume gets harvested from our oceans and ends in our kitchen and restaurant tables:

Bottom trawling involves dragging huge, heavy nets along the sea floor. Large metal plates and rubber wheels attached to these nets move along the bottom and crush nearly everything in their path, coral, sponges, plants, and all kids of sea life. It literally scraps the ocean floor clean of life.

It is used to fish cod, haddock, squid, shrimp and crustaceans among other commercial fish.

If allowed to continue, the bottom trawlers will destroy deep sea species before we have even discovered much of what is out there. What we are doing to our deep oceans by allowing trawling is like driving a huge bulldozer through an unexplored, lush and richly populated forest leaving a flat and lifeless desert.

This practice is so widespread and damaging that it can even be seen from space: 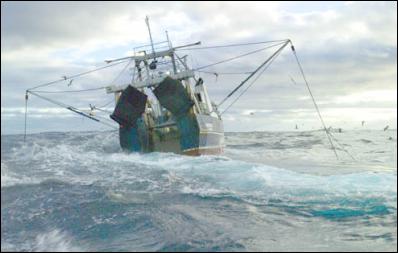 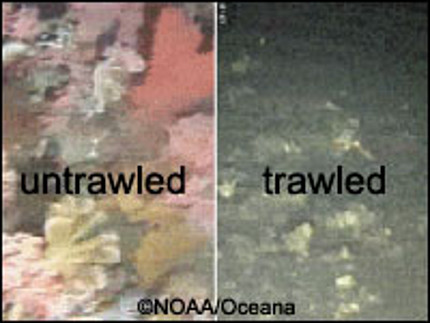 Ocean Floor Before and After Trawling

Long-lining is one of the most widespread methods of fishing. The lines are up to 130 km long (80 miles) and have hundreds of thousands of baited hooks at a time. The hooks are dragged behind the boat at varying depths or are kept afloat by buoys and left overnight.

This method is used to catch mainly tuna and swordfish, but it also kills millions of sea birds, dolphins turtles, and other marine life every year. 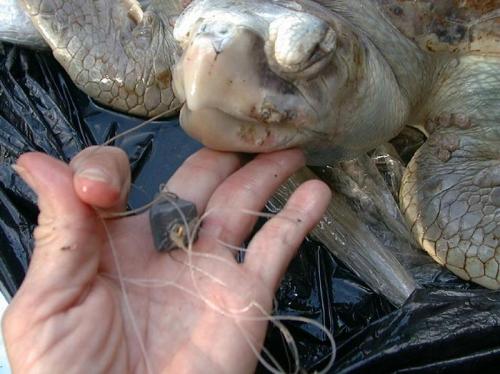 Turtle killed by a long line

Gill nets hang like massive curtains in the oceans, drifting with the currents. Ranging from 3.5 to 10 km in length, gill nets are weighted at the bottom and held upright by floats at the top, creating what some have deemed “walls of death.”

In many occasions they are left to drift for days an many of them get lost (become ghost nets) killing thousands of untargeted marine life- specially dolphins, turtles and seals.

This is the primary fishing method for tuna fish. Tuna swim at the same level as dolphins, and fishermen usually track dolphin pods in order to locate tuna.

The dolphin schools are then chased by small high-speed boats or even helicopters that accompany the fishing boats. When the dolphins begin to tire, the fishermen encircle the school with huge nylon nets that are up to 5 km long and 100 m deep. When both the dolphins and the tuna have been completely surrounded, the bottom of the net is pulled closed, much like a drawstring purse, hence the name purse-seining. Purse-seining has proven to be an extremely effective method of catching fish. Entire schools of tuna are able to be scooped up without a single fish escaping. Unfortunately, many dolphins are also killed in the process, as they become entangled in the nets and drown, or are crushed as the nets are pursed and hauled in.

Dolphins and Tuna trapped in a Purse Seine Net