The Amazon at “Steak”

The cattle industry is responsible for 80% of the deforestation in the Brazilian Amazon according to a recent report by Greenpeace : “Amazon Cattle Footprint”.

Over the last ten years more that 10 million hectares of forest (an area about the size of Iceland) has been cleared for cattle ranching. And the figures are rapidly increasing; the Brazilian government wants to double the beef production by 60% , and most of this expansion will take place in the Amazon, where land is cheap and available.

Industrial agriculture is also a large contributor to the Amazon deforestation, soy plantations are on the rise, mainly for bio-diesel and cattle feed production. Both cattle farmers and agribusiness are very powerful in Brazil, many of the country’s most influential politicians are linked to the industry.

A lot of money is being made at the expense of the Amazon, but the value of this ecosystem is far greater than what we are destroying it for.  It’s terrifying to know that we’ll probably find out it’s real value when it’s too late.

The Amazon rain forest is one of the most biodiverse places on earth, being the home of at least 40,000 different plant, 430 mammal, 1399 bird, 500 amphibians and 3,000 fish species, and many others that we haven’t discovered yet (and could be potential cures for human diseases).

Deforestation causes over 20% of global carbon emission, more than the world’s entire transport sector. The Amazon is estimated to store over 120 billion tonnes of carbon, which would be equal to over 50 years of current US carbon emissions if destroyed.

Cattle ranching in the Amazon also has social impacts on the region, including the highest rates of slave labor in Brazil. In 2008, 3005 rural workers who were kept in slavery were freed from cattle ranches in the Amazon.

The Amazon is also home to over 300,000 indigenous people who depend on the forest for their food, shelter, tools and medicines.

Greenpeace believes that Brazil can reach zero deforestation by 2015 through stronger enforcement of its existing environmental laws such as asking landowners to keep 80 % of their land forested,  promote sustainable development programs, increasing funding for monitoring and law enforcement, etc.

We as consumers can also do our part by reducing our carbon footprint. Some ways of doing so include reducing the quantity of meat that we consume, and checking its origin and how it was produced.

The greenhouse gas emissions from beef are 13 kilograms of CO2  per kg. This means that eating a kilogram of beef represents roughly the same greenhouse emissions as flying 100 kilometers of a flight, per passenger.

To know more about your carbon footprint go to this site.

Lessons from the Golden Toad

We will no longer be able to see the beautiful and unique golden toad (Bufo periglenes).

It was once abundant in the Monteverde cloud forest, a Costa Rica region where it was endemic (it only existed there), but no one has seen one since 1989, being therefore listed as an extinct species.

Scientists believe that the golden toad was driven to extinction by global warming.

Monteverde is a cloud forest, and the whole ecosystem depends on frequent formation of clouds and mist. The mist frequency has declined dramatically because of the warming of the oceans and the atmosphere.

The rise in temperatures and higher mist formation in the forest have also triggered disease outbreaks (such as the chytrid fungi) that infects the moist skins of frogs, toads and salamanders.

The golden toad is just one species among thousands that go extinct every year.

Biodiversity is being irreversibly destroyed by human activities at an unprecedented rate. Scientists estimate there are 10 to 30 million plant and animal species on the planet, most of them unidentified. Each year at least 50,000 species disappear.

Many scientists have argued that the current rate of extinction is approaching to when a gigantic meteorite struck the earth 65 million years ago, causing a dramatic climate change that led to mass extinction.

Frogs, toads and in gerenal all amphibians are extremely sensitive indicators of environmental changes, as the uptake of oxygen and water through their skin can increase concentrations of pollutants.

They are so sensitive to changes in the environment that scientists have compared them to a canary in a coal mine.

In coal mines a poisonous coal gas is released from the earth during mining operations, which is a risk to the workers.

Coal miners used canaries to warn the miners of imminent danger since canaries are more sensitive to toxic fumes and will die of exposure before a human. If the canary that they carried in the cage died, it meant that it was time to get out!

And this is exactly what many species like the golden toad are trying to tell us, it’s time to stop!!

Time to stop polluting our environment and change our unsustainable life style.

Not only the survival of millions of animal and plant species are at stake, but also life for humans on earth.

Let’s listen to the golden toad and change before its too late. 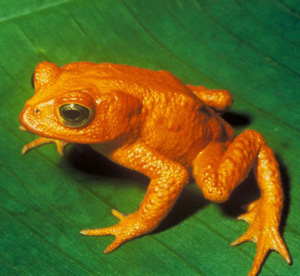